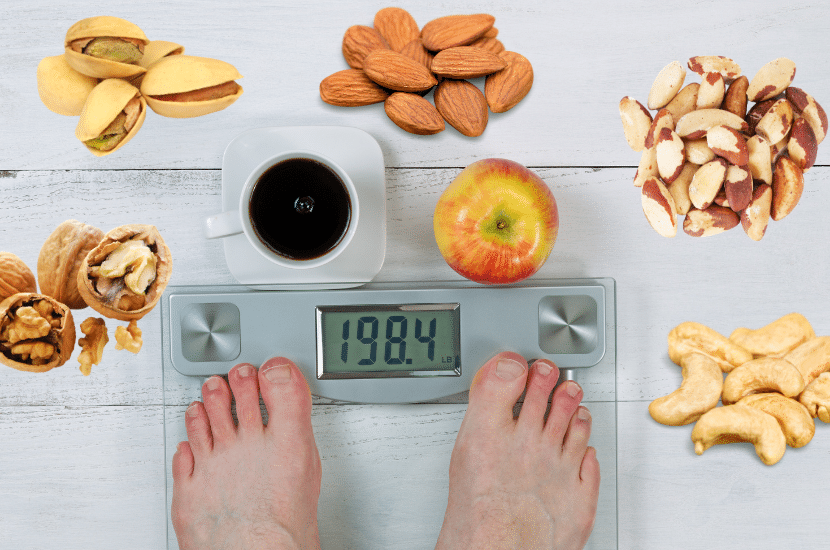 Losing weight is something we all aspire to achieve, but we know that it is not an easy feat. Here are some nuts as a healthy snack option for you to munch on without gaining weight. Their high protein content can also increase your sense of fullness are reduce your appetite, thus promoting weight loss.

Walnuts contain heart healthy polyunsaturated fats, also known as alpha-linolenic acid (ALA). These fats can only be taken from food and not the human body as the human body cannot produce it. The ALA helps to reduce the risk of developing heart illness, lowers “bad” low-density lipoproteins (LDL) cholesterol, and suppresses appetite, therefore helping your body to lose weight faster. A study found that people who had walnuts (containing polyunsaturated fatty acids) in their meal burned 28% more calories than people who had dairy products (containing saturated fatty acids) in their meal. Furthermore, walnuts may stimulate the brain to release hormones that can help to control your appetite. In a research published in Diabetes, Obesity and Metabolism, hospitalized obese patients were divided into two groups, with one being given walnut smoothie and the other a placebo walnut smoothie. They underwent an MRI scan while looking at pictures of food. The results showed that for those patients who were given walnut smoothie, a part of their brain which was responsible for appetite control was activated, while it was not activated for those that were given the placebo smoothie. This thus concludes that consuming walnuts have an effect on the brain which can alter the way we suppress our appetite when tempted.

Almonds contain 161 calories and 14 grams of fat. Despite being high in calories, they have high fiber and protein content, which makes you feel fuller and hence lowers your calorie intake. In a one-month study consisting of 137 participants, 43 grams of almonds were able to reduce their appetite remarkably. In another experiment, 65 overweight people were split into two groups; one was given low calorie food with almonds, the other was given low calorie food as well, but with healthy complex carbohydrates. Both diets had the same amount of proteins, cholesterol, calories and saturated fat. After six months, the group whose diet consisted of almonds lost 62% more weight, lost 56% more fat mass, and had a decrease of 50% more in waist size. Hence, regular consumption of almonds together with a weight loss diet can promote and accelerate weight loss.

Brazil nuts are one of the healthiest nuts, containing high amounts of protein, which helps you to feel full, and being low in carbohydrates, ensures that your calorie count is at a healthy level. This can be seen its nutritional information, whereby for every 100 grams of Brazil nuts, there are 14.32 grams of protein and 11.74 grams of carbohydrates. Brazil nuts are also nutrient dense, containing magnesium, phosphorous, selenium and thiamine which can help to promote weight loss as well. Lastly, Brazil nuts contain L-arginine, which is an amino-acid found in protein rich food. This amino acid uses stored fats and burns it to produce energy that helps with muscle formation, thus promoting weight loss.

Pistachio nuts are one the nuts with the lowest calories, at 562 calories per 100 grams. Furthermore, they have sufficient fiber and protein that can help you feel satiated, thus reducing your appetite and preventing weight gain. In 2012, a study was conducted on the effects of pistachios on weight loss was conducted. The participants were divided into two groups; one group was given 53 grams of salted pistachios to consume, while the other group was given 56 grams of salted pretzels to consume, both over a period of three months. The results showed that the group that consumed pistachios had twice the reduction in body mass index (BMI) compared to those that ate pretzels. On the sixth and eight weeks, the triglycerides levels of those who aid pistachios were also remarkably lower than those who ate pretzels. Triglycerides are a type of fat in blood which can lead to heart illness, cholesterol, and type 2 diabetes. Hence, consuming pistachios can help to reduce fats and hence prevent the risk of developing diseases while promoting weight loss. Pistachio nuts also help in weight loss because the shells that are peeled serves as a visual reminder of the number of nuts eaten, and hence helps people to control their nut intake, leading to weight loss.

Cashew nuts contain 553 calories and 43.85 grams of fat per 100 grams. As cashew nuts tastes creamy and are thought to be high in calories and fats, the good news is that only 84% of these calories are digestible. This is because the fat is trapped within the cashew’s wall, preventing it from being absorbed during digestion. However, do take note that you should consume raw cashews instead of baked cashews baked cashews contain more calories. Cashew nuts are also rich in fiber and protein, thus promoting a sense of fullness which helps in weight loss. Lastly, cashew nuts are rich in magnesium, containing about 292 mg of magnesium per 100 grams. Magnesium helps to reduce plasma glucose levels, bloating and water retention, hence promoting weight loss. Magnesium also helps to convert fat into energy for cells during a workout, hence resulting in fat loss and subsequently weight loss.

In conclusion, nuts contain plenty of nutrients, vitamins, and minerals essential for health. Their high protein content also renders them good snacks to eat on a weight-loss diet as they tend to make one feel full, which can curb appetite and reduce one’s intake of calories. However, do remember to see your doctor or dietician for guidelines on how to add nuts into your diet plans. We wish you all the best in your weight loss journey!