The Difference Between Raisins, Sultanas and Currants 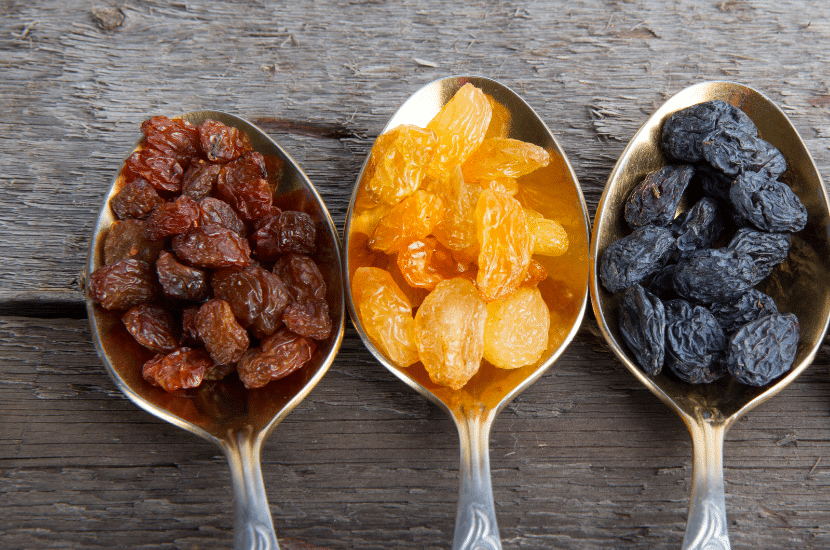 Raisins Vs Sultanas Vs Currants: What’s the Difference?

You have heard of these fruits before, but have you ever wondered what is the difference between them? They are essentially dried grapes filled with fiber and antioxidants. This article delves into the differences between them, so read on to find out more!

Raisins mostly come from the Thompson Seedless variety. However, there are other varieties such as the Lexia, Waltham Cross, and Muscat varieties hailing from Australia. They are made by the traditional method of drying in the sun for three weeks or by using a dehydrator machine. As they are dried, they turn into a dark brown shade. Raisins are larger than sultanas and currents. Texture wise, they are soft and wrinkly. Taste wise, they are naturally sweet, and they can absorb flavour better than the other two dried grapes. Hence, they are a favourite to be soaked in liquor to make rum and randy for they enhance the liquor’s tastes.

Sultanas are made from green seedless grapes, predominantly produced in Turkey. However, they are also produced in the US, from the Thompson Seedless variety as well and are called “golden raisins” or “sultana raisins” there. The main differences between sultanas and raisins are that sultanas are preserved with sulfur dioxide, the same chemical compound used in wine making, to prevent oxidation and to give the sultanas their light golden colour. Some sultanas are also coated with vegetable oil before drying, so as to dry the sultanas faster. It is also interesting to note, that the British commonly use sultanas as their preferred choice of dried grapes compared to raisins and sultanas. However, you need not strictly adhere to sultanas and can easily replace them with either of the other two dried grapes. Sultanas are also smaller, plumper and juicier than the other two varieties.

Currants are small, pea-like dried grapes, also called Black Corinth or Champagne. They are different from raisins and sultanas as they grow in bushes instead of on vines. In most of their packaging, they are labelled as black currants or Zante currents. Zante is an island in the South of Greece where currants were originally grown. They are not the same as black currents as they are tart red. They also have a tart, tangy and intense flavour, which makes them good to be used in scones, cakes and in your bakes.

Raisins, sultanas, and currants have similar nutritional profiles, all being high in natural sugars, at 17 grams, 21 grams and 19 grams respectively. These dried grapes also have four times the fiber, minerals and vitamins compared to fresh grapes. In addition, 28 grams of dried grapes contain around one to two grams of fiber, which is about four to eight percent of your daily fiber requirement. High fiber food may also help to reduce the risks of developing diabetes, heart illness, and high blood pressure. However, dried grapes contain less vitamin C and vitamin K than fresh grapes. Raisins also have other benefits, such as improving blood sugar levels, increasing sense of fullness and lowering blood pressure.

These three types of dried grape are a versatile garnish to any food item as they are small, and their chewiness are good when you want to add a munch to your food. As they have similar properties, they can be easily substituted for each other except for black currants, as their size is the smallest and they taste more sour. Raisins are an ideal component for a cheese platter, as they are the largest of the three and they go well with creamy cheese, nuts and crackers. They also go well with salads, as they add some juiciness and sweetness to the crunchy leafy greens. Remember to store them in a cool, dry place, away from sunlight so that they will not dry out further. You should also keep them in the refrigerator to expand their shelf life.

All in all, there are little variations between these types of dried grapes. They only differ in terms of their size, colour, origins and drying process.  As with all other nuts and dried fruits, they should be eaten in moderation as dried grapes are high in natural sugar and calories. When eaten in appropriate amounts however, they are beneficial for health as they provide the benefits of being high in fiber, potassium, and antioxidants. Thus, get some golden jumbo raisins or green raisins today!