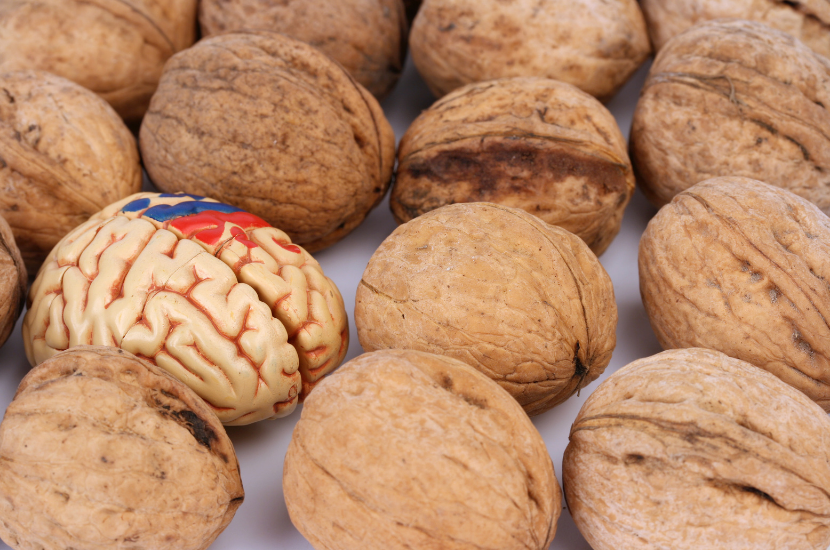 The brain is human’s biggest asset. It is necessary for the functioning of life and it affects how you move and think. How then, can we improve our cognitive function to get that extra brain juice needed to solve the world’s complex problems? These unassuming nuts and seeds may just be the solution for you.

These brain-shaped nuts are undoubtedly the first superfood you should think of when it comes to brain health. They contain vitamin E, polyphenols and polysaturated fat that help to reduce damage done by free radicals and therefore reduces inflammation in the brain. This then leads to increased cognitive functions such as better memory, faster registering of facts and reduced apprehension etc. Walnuts are also one of the few nuts that contain substantially high amount of DHA, which is an omega-3 fatty acid that is beneficial for the development of an infant’s brain. The DHA also helps with age-related cognitive ailments such as Alzheimer’s disease.

Almonds have higher amount of vitamin E than walnuts. Vitamin E is an antioxidant that aids in cognitive function as it protects the nervous cell membrane from oxidative stress. Oxidative stress occurs with age and hence is a cause for age-related brain degeneration. Vitamin E may not prevent dementia, but it may slow down the effects of Alzheimer’s disease. Almonds contain 23.63mg of vitamin E for every 100 grams and hence are rich in vitamin E which has a positive effect on brain health.

Hazelnuts are also one of the heroes for brain health. They contain elements that can boost cognitive functions and help to prevent the decline of the brain down the years. More specifically, they contain high amounts of vitamin E, manganese, thiamine, fatty acids and folate which help to boost the brain. As mentioned, vitamin E plays a positive role in combating age-related cognitive diseases. As for manganese, a deficiency in manganese may cause changes to neural activity. Abnormal amounts of manganese are also linked with Parkinson’s disease. Hence manganese plays an important role in cognitive activities. Thiamine, which is vitamin Bi is important for the functioning of the nervous system. Without it, it may also lead to a brain disorder of which the symptoms include hallucination and vision impairment. As for fatty acids, they aid in the functioning of the nervous system and help to fight against depression. Hazelnuts can generally help to promote healthy ageing, better memory and reduce uneasiness. Lastly, hazelnuts contain folate (vitamin b9) that helps to prevent a decline in cognitive function and dementia. A study published by the American Journal of Clinical Nutrition found that the decline in cognitive function of the elderly is related to low amounts of folate. Conversely, another study produced in 2015 showed that a higher folate intake reduces the risk of developing Alzheimer’s disease. Hence, hazelnuts should be consumed for those who lack the various elements needed for brain health.

More research about the positive effects of peanuts on brain health need to be developed, although research at Loma Linda University Health discovered that consuming peanuts regularly may boost brainwave frequencies that linked with retaining and gaining knowledge. Peanuts are rich in niacin, which protects against Alzheimer’s disease. Peanuts are also rich in folate which is required for two things- the speed with which we understand things and remember them. Folate is important for people of all ages and a lack of it may lead to depression.

Pumpkin seeds contain quite a few nutrients that are beneficial for the brain. They contain antioxidants that protect both the body and the brain from cell damage. They also contain zinc, copper, iron and magnesium. Zinc is necessary for the nervous system to signal messages and without it, may lead to cognitive illnesses such as depression and Alzheimer’s disease. Copper is also similar to zinc in that it plays a role in controlling signals in the brain and without it, may also lead to Alzheimer’s disease. The lack of iron may lead to a lack of sharp memory and impaired cognitive abilities. Lastly, magnesium is needed for gaining and retaining knowledge. Low levels of magnesium are related to migraines, depression and epilepsy.

Sunflower seeds are also great sources of vitamin E which protects the brain from oxidative stress that comes with age. They also contain thiamine, a vitamin mentioned earlier that is needed for the functioning of the nervous system and memory. The magnesium in it helps to prevent migraines, while the selenium and choline content also aids in cognitive functions.

All in all, these nuts and seeds contain wonderous minerals and fatty acids needed to support cognitive functions and prevent age-related diseases, so don’t hesitate to get some for yourself today!